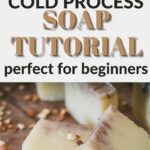 Making soap was one of the first self sufficient skills I ever learned. Once I began questioning what we were putting into our bodies, what we were putting on them was not far behind. I worried about the chemicals and additives in store bought soap and I wanted to learn a skill that I feel is important. So, I taught myself how to make cold process soap.

A lot of people fear making soap, especially any type that isn’t melt and pour. But, it’s really not so bad. Sure, you have to work with lye, yes lye is incredibly caustic. But, it’s not near as scary as it may seem. You simply have to use a few precautions and some common sense and you’ll be well on your way with working with it.

I know several people have asked me how they can make soap without lye. And the truth is, you cannot. Saponification of oils requires lye. Melt and pour types simply already have the lye mixed in. They can be a great place to start for a beginner, but they’re not really teaching you the process of saponification or the skills to become more self-sufficient.

How Is Soap Made

Simply put, soap is made by combining fat and oils with a liquid and lye to really simplify the process. The lye and liquid mixed in cause saponification of the fats and create the bubbly mixture we generally associate with soap.

In the past lye was made using wood ash and soap was made by adding water and wood ash to a singular fat, typically. Sometimes the result was a little harsh, but now we utilize scales to insure we measure everything out so that we have the correct ratios of fats, water, and lye.

You can use a lot of different fats and oils to make soap, but for this particular recipe we are using a mixture of pastured lard, coconut oil, olive oil and sweet almond oil. Whenever you make soap, regardless of the recipe, you’ll want to run it through a lye calculator. You can find a pretty user friendly one right here.

That being said, if you don’t happen to have one of the oils and you want to make soap, don’t fret. You still can. You’ll simply add the oils you do have to the lye calculator and it will give you different amounts and a different lye and water ratio. It is extremely important that you follow the amounts. Nothing will blow up, but it can make the soap too harsh if you don’t watch what you’re doing.

I definitely don’t tell you this to scare you, either. The wonderful thing about soap making in today’s world is it is highly customizable. I typically use grass fed beef tallow to make soap, but we were running low so I decided to use lard this time. Next time I may try some deer tallow. The sky is the limit, you just need fat, liquid, and lye. You can also make soap with milk, but I will save that tutorial for later as the instructions are a bit different.

Why not just use the soap from the store? Well, because it’s basically detergent, not soap and you never know what’s in it exactly. It typically has chemicals you can’t pronounce and unnatural fragrances. I like to keep things natural whether we are consuming it or just using it to wash up with or clean with.

Like I said, when you make your own soap, you can keep things natural. Saponification is a natural process. You can use fats that you have right on your own land (you can make soap using a singular fat). You can color it if you’d like using natural ingredients and you can scent it (or not) using essential oils.

I really like having the freedom to know what we are putting on our bodies as much as possible. So, I will continue making soap.

Customize it to your liking

I mentioned this earlier, but soap is incredibly customizable. You never have to make the same recipe twice. The steps are the same (assuming you’re using water and not milk). You can change the oils or the ratios. You can add things like shea butter or beeswax. You just have to run everything into a lye calculator and you’re good to go.

Like I said, this is one of the first self-sufficient skills I learned. It’s becoming a lost art, but can be an essential skill. I like not having to depend on large corporations to take care of me and mine. The less dependent I have to be on a failing system, the better. And I think you probably feel the same way.

Besides, it’s cheaper and safer than the alternative.

How to Stay Safe With Lye

Lye… the big bad scary chemical. It’s really not so bad. Should you go dancing in it and throw it around? No… but common sense goes a long way. You just need to cover up and use a little bit of caution when you’re using it. I wear rubber gloves, long sleeves, long pants, closed toed shoes and goggles when working with it.

I make sure I label anything and everything I have used to hold lye, keep it out of reach of everyone, and make sure my kids are entertained or contained doing something else when working with it. A lot of times I can simply shoo them outside and get the soap made without any consequence. The older two already know that it’s nothing to play with, it’s just the younger one I really have to worry about.

I always wear long sleeves, long pants, and closed toed shoes along with goggles and rubber gloves when working with lye from the time I start until I am finished cleaning up. I put on my soap making clothes before I start and I put my goggles and gloves on as soon as I’m ready to measure out the lye. Once you’ve mixed the soap and poured it, it is still caustic until it has sit in the mold for a while. So, keep gloved up until you’re finished.

At any rate, it’s not so bad to work with, it just takes a few precautions.

Making cold process soap is a simple enough process. Here's how to do it safely step by step.

You should run your recipe through a lye calculator (even this one) to make sure the measurements are correct. I use soapcalc here.

We made our own soap molds, but you can also purchase them online.

There you have it. I know, this is a super long post, but I hope it encourages you to give this a try. It’s not as scary or difficult as it sounds and it gets you one step closer to becoming self-sufficient and who doesn’t want that?

If your pouring into silicone molds 3 @ 6 bars each, would it still need to cure for 3-4 weeks?

Yes. You can use soap as soon as it hardens, but it comes at the cost of not lathering quite as well or lasting as long. When you cure soap, regardless of how it is poured, it helps harden the bar which results in a longer lasting bar and it will also lather better because it is harder. Hope that helps.

When its curing for the 3 to 4 weeks, do you cover it?

What if you used cinnamon infused olive oil?

That would work fine :).