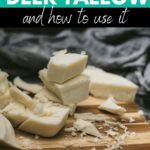 Jump to Recipe
As an Amazon Associate I earn from qualifying purchases.

Contrary to popular belief, venison fat is useable and worth the effort to harvest. While deer tallow isn’t a common term for most folks, it does serve a purpose and has a place in your kitchen.

Until recent times, people had a pretty intimate connection with their food. They knew where it came from and were typically personally involved in every aspect of it from field to table. This connection also gave them first-hand knowledge of more traditional ingredients and how to use them.

In today’s world, that connection and those traditional ingredients and practices have been largely lost to the industrialization and commercialization of our foodstuffs.

In the past, butchering an animal would’ve been done in a person’s barn, depending on the size of the animal it may have been a local, community effort or simply a family event. When butchering, our ancestors generally took the time to harvest and find a use for nearly every part of an animal, including the fat.

What is deer tallow?

Animal fat that is rendered down from deer, elk, moose, caribou, bear, sheep, goats, bovine, and other ruminants is called tallow. While fat rendered pork fat is generally called lard , fat rendered from birds is called schmaltz, and rendered butter is referred to a ghee.

Simply put, deer tallow is created by the act of slowly heating pieces of fat up to melt it, also referred to as rendering. It is then cooled and stored.

While deer don’t have much fat on them and many, many people say it’s not worth the effort to harvest the fat for rendering, it actually is. Just like rendering lard, deer fat has its place in the world well above vegetable oils, which are actually rancid and has been industrially bleached and deodorized to mask its rancidity.

It can seem like it isn’t worth the effort because venison is such a lean meat, but I promise the effort you take to harvest and render deer fat will be worth it.

Where does deer fat to make tallow come from?

Believe it or not, there are different types of fat on a deer. First, and foremost, there is the caul fat which is the thin, lacy fat surrounding the deer’s entrails and is fantastic for covering venison meatloaves or meatballs or using as sausage casing. You can remove it, package it and freeze it for later use.

The next type of fat you’re likely to encounter when butchering a deer is the suet. This is the fat inside the body cavity surrounding the kidneys and such. It is hard and waxy. This is generally the fat that is rendered from a cow, while a lot of people say they don’t care for it from a deer. Me? I use it to render, it does have a higher melting point, though. It’s fantastic for soap making, and can just simply be rendered for cooking, too.

And lastly, is the fat on the outside of the carcass, all those bits that you usually cut away and put in the gut heap, it’s good fat. Unfortunately, if you aren’t hanging your deer in the hide, you need to work quickly so the fat doesn’t go rancid.

The quicker you can get your deer broken down, cooled, and out of oxygen (in the refrigerator) the less likely the fat will go rancid, the longer it will store, and the better tasting it will be.

Fat is the flavor vehicle of all meat, not the muscle itself, so fat flavor largely depends on diet. While in the past people made pie crusts out of lard (which does have a pork-like flavor), most of society has become accustomed to vegetable shortening, which has no flavor because it’s deodorized and bleached so eating traditional fats can be a bit of a transition.

Depending on where your deer is from will largely dictate what the fat will taste like. If you hunt in the grain belt, it likely ate a good deal of grain and grass and will taste similar to the beef most of us are used to eating. If your deer ate a lot of acorns, the flavor will be equally delicious. Hunting in areas where deer are small and typically very, very lean, the little bit of fat on it may not taste very good (though, it can still be used to make candles and soap, more on that later).

If you aren’t sure if you want to go to the trouble to render fat you won’t enjoy the flavor of, melt a small sliver in a pan with some water and smell it. If you enjoy the smell, it’ll taste good. If you don’t? I still recommend you render it and make it into good soap or deer tallow candles.

Deer fat is very high in stearic acid, which gives the fat a sort of waxy feel that will coat your mouth. But, if you like beef fat, you’ll enjoy deer fat and rendering it into tallow helps calm down that coating feeling that can be too much for a lot of people.

Even rendered, deer tallow will coat your mouth. A little bit goes a long way. Add small amounts to your cooked summer sausages or deer burger and the flavor is amazing and it’s not too waxy. Add too much, it’s waxy and can be unpleasant.

What are the benefits of tallow?

Tallow of all kinds supplies you with all sorts of essential, fatty acids.

What is deer tallow used for?

How to render deer tallow

To begin, trim deer fat from the carcass, removing as much meat as you can; immediately refrigerate and cover it until the next day.

Next, you’ll want to either grind the fat with a hand grinder, an electric grinder, or cut it up into small pieces. If you’re cutting it by hand, you’ll want to start with really cold fat, in fact, you may want to pop it in your freezer for a bit to get it really cold, just not frozen.

Alternatively, if you do not have a grinder, you could also pop your trimmed fat into a food processor to get it chopped into little bits.

Place your ground-up fat into a large stockpot, add a cup of water, cover, and cook on the lowest heat setting you possibly can.

Now, you wait. The rendering process will take a long time. It took about 5 hours to render and my 5-quart stockpot was full. You’ll have bits of meat and other impurities that separate from the fat as it’s rendering, this is normal. Check it once in a while to make sure it’s not burning and give it a little stir.

You’ll know the fat is rendered once the impurities are floating (the little pieces of meat generally sink to the bottom of the pot) and the fat is clear and no longer cloudy.

Once rendered, place some cheesecloth in a colander and carefully pour your liquid fat into a bowl.

Next, transfer your strained fat into a pan, or glass jars. I prefer cooling mine in a pan and chopping it up because tallow is very hard when solid and that can make it difficult to get out of the jars.

Deer tallow, like all rendered fats, is shelf stable, once rendered it can be kept at room temperature for a year or longer assuming it is kept cool and out of direct sunlight.

Fat from a deer is melted and rendered into this natural oil for cooking, baking, and more.

We live in Northern Arizona where the deer are pretty small and lean. I'm not sure it would be great for cooking. We also can only hunt one of each animal per year (IF we are drawn for tags). But I have an elk tag this year. Is elk tallow good? Is it the same process? The elk vary widely in size and fat content, but the elk my husband got 2 years ago had quite a bit of fat, that had I known about this I might have tried to render it!

Elk tallow is good and yes, the process is exactly the same :). Good luck!