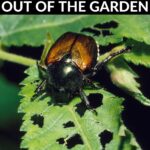 They were accidentally introduced to the United States just earlier this century, and they have got to be one of the most obnoxious garden pests in existence.

Despite the fact that they’re actually only out and active munching on your plants 6-8 weeks out of the year, it seems like an eternity of fighting with them.

I dread Japanese beetles (like most gardeners) because they can completely destroy a harvest in no time flat. And it always seems like they are impossible to get rid of.

However, there are a few ways you can get rid of Japanese beetles so they’re not destroying your harvest. The best part, they are completely natural solutions! I don’t like to use synthetic chemicals at all, but especially on my food, so these methods will work without having to use stuff I don’t agree with.

9 Tips on How to Get Rid of Japanese Beetles Naturally

Hand Pick Them Off

I know, I know. Why is it the most effective way to get rid of almost any garden pest is by picking the creepy crawlies off by hand? Well, unfortunately, that’s just the name of gardening. It is easiest to collect them in the morning time. They are most active, but they’re sluggish. Just pick them off and throw them in a bucket of water to drown.

Until I really started getting into gardening and natural remedies, I had never even heard of neem oil. But, it is fairly effective at helping you curb the population of Japanese beetles. You can make a spray and spray it on your plants. The adults ingest a chemical in the neem oil that they will pass on to their eggs. Essentially wiping out a new generation of beetles. You need to reapply after any rain.

Bring on the Guinea Fowl

We added 6 guinea fowl to our flock this year and I am so glad we did. They can be quite noisy, but thankfully I love their sounds. They also have beautiful feathers and will eat just about any bug in existence. They’re great pest control birds. They won’t tear up your garden and they’ll eat anything that bugs it.

If you have tall foliage, they may not be able to reach it. But, they can take care of the bottoms of all of your plants for you! I love having our guineas around (they eat ticks, too, which is awesome).

Like I said earlier, Japanese beetles are only active from 6-8 weeks a year. So, you can just use floating row covers during that 6-8 week period to protect your plants beginning in mid-June.

You’ll find Japanese beetle traps are plentiful. However, I do not recommend using them. They attract the beetles to your area, which can make problems worse than they would have been. The store bought traps contain a pheromone to attract them. The homemade traps using fermented fruit cocktail also attract them. So, ditch the traps unless you want to attract even more bugs to your property….

Did you know Japanese beetles love geraniums? They do. However, they’ll eat the blossoms and fall down, dead. So, you can plant geraniums around the edges of your garden or near plants you don’t want them to ravage and it will help protect them a little bit!

Garlic and Japanese beetles (most pests, in fact) are not friends. You can plant garlic around your most precious plants and help repel them fairly effectively.

Japanese beetles start our as icky little grubs in the soil that can also wreak havoc on your garden and root systems. However, there is a way to combat them. While a lot of people recommend milky spore, it can take several years to become effective and it only controls the grubs of Japanese beetles. Beneficial nematodes, however will control all grubs and they do not take years to be effective.

Beneficial nematodes are applied as a live product so ensure that wherever you get them from has handled them carefully to ensure they are still alive. Dead nematodes won’t do anything for grub control.

I’m not much of a yard/lawn person. What isn’t dedicated to livestock or garden space on our property is free to do as it pleases. I mow, of course, as I don’t want my property full of unwanted guests, but pretty lawns just aren’t my thing. I don’t water it, and I hope you don’t, either. But, if you do, stop. You’re just asking for those little grubs to come multiply under your grass and create a whole new generation of obnoxious, garden eating pests.

Japanese beetles are an obnoxious pest. Gardeners complain about them every year (for good reason). But, with a little diligence and planning you can keep them away from your garden.

How to Naturally Control Cabbage Worms

In regards to watering your lawn. If using beneficial nematodes you must soak your lawn prior to application and keep the soil somewhat moist for them to be effective. (Alive) They are incredibly effective, and inexpensive.

I definitely agree with not using the store bought japanese beetle traps! I've had some experience with them and they honestly do not seem to work at all; if anything making the problem worse.