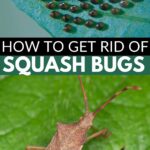 The squash bug is a sinister little insect that is commonly found on pumpkin and other squash plants. They’re pretty destructive in the spring when seedlings are tender and young, but not as much in the summer and fall when plants are able to handle the destruction.

So, how do we take care of the problem before it we have a squash bug infestation on our hands? We learn to identify the insect, then learn what they do, and figure out how to keep it from happening (at least on a grand scale).

The squash bug (anasa tristis) is pretty widespread across North America. Adults are brown or grey in color, and a little over a half-inch long as adults.

They are commonly mistaken as what most folks call stink bugs because they look very similar, but stink bugs are a bit more round. However, both the squash bug and the stink bug produce a foul odor when squished.

The nymphs are small, grey bugs with black legs. They typically gather on the undersides of the leaves on your favorite vegetable garden plants.

These bugs overwinter in buildings, in dead leaves, under boards, etc. They will fly to the garden in the early spring as soon as the vines are sprouting and the females lay eggs on the undersides of the young plants. You’ll often find clusters of eggs on the underside of the leaves that are brown in color.

The squash bug can fly, but typically once they reach your garden, they simply crawl around. You’ll find adults on damaged plants, crawling around looking for their next victim.

Search, conquer, and destroy! Seriously, they will make your plant’s leaves turn black and die off.

These bugs have piercing suckers for mouths. They pierce the plant, inject a toxin, and suck out the sap from the plant.

This results in young tender plants wilting away. The actual condition is called ansa wilt and while this isn’t a true plant disease, the effects appear very similar to the actual disease of bacterial wilt (a disease spread by cucumber beetles).

This makes it important that you properly identify the insect you’re dealing with so you can manage it appropriately.

Rest assured that mature, mature plants can typically bounce back from the bugs feeding off of them. But, young tender plants typically die off and large numbers of squash bugs can kill the most established of plants. This is why it’s important to deal with it as soon as you notice a problem.

How to Get Rid of Squash Bugs in a Natural Way

Squash bugs can be incredibly difficult to kill. Especially after the eggs hatch and you have adult bugs on your hands, which means early detection is critical!

If you already have a problem with them, there are a few things you can do to try to solve the issue, but you might want to take some of these other tips into consideration when harvesting this season and planting next.

Just like keeping cabbage worms off of your cabbages, the same principle applies.

Row covers are one of the best ways to keep your plants protected from squash bugs. With row covers the adults aren’t able to fly onto your plants. If they can’t fly onto the plant, they can’t lay eggs on them stopping the cycle in its tracks. You only need to keep the covers on until your plants are large and well-established.

I will warn you, though, that if you didn’t make a plan last fall, you may still get them (see the next tip).

Dispose of infested plants after harvest

The plants that were affected by the bugs this year will have eggs on them. Unfortunately, the eggs can overwinter in your garden space, hatch in the spring, and cause a whole new problem.

So, the best way to control them is to plan.

Remove all of the plant debris of any infested plant from your garden as soon after harvest as possible and burn the garden debris. Some people put them on their hot compost pile, which if it’s at the right temperature should kill the pests, but it’s not worth the risk to me.

While you should be doing this anyway as it prevents nutrient depletion, you need to make sure you rotate your crops annually.

Disposing of infested plants after you harvest helps immensely, but if you plant your crop somewhere else entirely the following year, you’re even less likely for overwintering insects to hatch and find their way to your plants.

Squash bugs can creep in when you don’t notice and become a problem quickly, so it’s important to keep your eye out for adults, nymphs, and eggs. You’ll often find them on the undersides of leaves and if you see the damage, they’re around there somewhere.

The easiest way to remove them is to make a bucket of soapy water and place all of the eggs, nymphs, and adults in the bucket. Then, just pour it out wherever (they’ll drown, so it’s not a problem).

Instead of direct sowing your cucurbit plants, you can start seeds indoors. This can avoid small, tender seedlings from being killed before they have a chance to grow.

Mulch and squash bugs kind of have a love-hate relationship. While mulching helps keep garden weeds under control and keep appropriate moisture, these guys actually seem to be drawn to the cool mulches as hiding places.

This is especially true of things like straw. But, this doesn’t mean you can’t utilize the benefits of mulching your garden. Just don’t use mulch right up against the base of your plant (which isn’t a good idea anyway).

These birds are pretty awesome. They are great at pest control for insects like cabbage worms, all the way to ticks and helping get rid of snakes.

Forewarning, though. They are very, very loud and will alarm at virtually anything, so they’re not for everyone.

Using diatomaceous earth can be a great squash bug control solution, but it also kills off beneficial insects (that can also help keep your pest population under control).

However, used sparingly, you can safely dust your plants with it to reduce the amount of bugs you have, just remember it kills the good and the bad, it’s not selective.

Using resistant varieties can be helpful, especially if you have a major infestation. Butternut, royal acorn, and and sweet cheese varieties are all resistant to squash bugs.

An effective way to keep the bugs at bay is to make a repellent spray. It is fairly easy to make and organic, which is good in my book. To make you’ll just mix:

Put it in a spray bottle, and shake it very well before using. Simply spray it on the leaves of the plant after shaking the mixture well. This will not harm the plant and can be sprayed as often as necessary.

Companion planting can be extremely beneficial to keep numerous pests at bay. Some companion plants to plant amongst your squash/cucurbits are nasturtiums, bee balm, mint, garlic, calendula, and radishes.

We have a lot of good luck with calendula and it’s fantastic at self-seeding meaning you probably won’t need to start a bunch of seeds every year. Radishes and garlic are two of our other favorites as we’re already growing them and eating them.

A debt of gratitude is in order for sharing these tips! I got squash in my garden and tragically I lost 2 of them because of these bugs. These are great tips and this article will help me control pests on my squash.

I've also read that you can plant the "sacrificial" zucchini plant a bit away from your regular garden. Then when the squash bugs appear, remove it, burn or put it in covered trash can and then plant your squash transplants.

Huh, makes sense. Thanks for sharing.

Thank you for this information. I only got 3 zucchini harvested this year and lost my zucchini plants due to these evil creatures. I pulled up all the plants last night. :(

I have cucumber growing nearby and I'm hoping to keep them off those plants. This is my first Garden and I didn't know how awful these bugs are until too late.

I've tried most of those. The daily squish and the guineas are the most effective. I'll have to try your homemade spray.

I hope the spray works as well for you as it has for us!

Thank you for the post. We lost all of our squash, and melons last year. I had a broken ankle and didn't see them until it was too late. 2 rounds of Diatomaceous earth got rid of most of them but the plants could not be salvaged. They are easy to spot so daily search and destroy will be on my agenda next year, and we always rotate from one area to another.

I'm so sorry you lost all of your squash and melons, that certainly stinks. I hope you have a plentiful crop this year!!