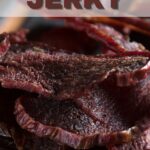 An easy venison jerky recipe that can be used for other types of meat as well. The perfect road trip snack, full of meaty flavor.

I love venison. Oddly enough, after I met my husband I began eating venison. And now? I’ll take it over beef any day. Not that I don’t enjoy a big, juicy beef steak. But venison… I love it. It’s never tasted gamey to me. Just delicious, lean, red meat.

And jerky, of all kinds, has been a favorite snack of mine for… well, forever. I remember the first time I bit into a slice of real jerky. My friends dad had made it when we were kids and I was hooked. That stuff at the store? They can keep it. But, real homemade jerky is delicious.

Venison jerky is not difficult to make, I like to let mine marinade for a day at a minimum, two days if I get busy. It’s a great way to make sure the meat doesn’t go to waste and it’s the perfect road trip snack for those long camping trips in the warmer months.

First, it doesn’t matter what kind of roast you use. Just whatever you have on hand that you need to use up. You will want to remove as much of the silverskin as possible if you haven’t already. Because silverskin in jerky equals pieces that are near impossible to chew up. They wind up hard and icky.

To make slicing easier, I suggest you put the meat in the freezer for about an hour. You don’t want to freeze the meat. You just want it to be easier to slice and the partially frozen meat is easier to slice.

If you ask my husband, he will tell you at least 30 times that the way to make it is to invest in a meat slicer. We don’t have the money for such a contraption. So, although it would be nice to throw it through a slicer to wind up with beautiful, thin-sliced strips of venison… we will have to stick with doing it the old-fashioned way. Such a shame… I know.

Anyway, back to the task at hand. You’ll want to cut the meat against the grain, while it is partially frozen. This will allow you to get nice, thin strips. You don’t want them to be much thicker than around 1/4″. If they are, your jerky will take practically forever to dry.

Can I use an oven to make venison jerky?

You sure can. But, it won’t be near as good as a dehydrator. We were gifted a dehydrator from a husbands friend a few years ago and while it isn’t the absolute best dehydrator on the planet, it does its job. I have my eyes on the excalibur… but not until funds allow.

If you do use an oven, you’ll want to turn the temperature down as low as it will go. That’s typically around 200℉. You’ll have to put your venison in strips, not touching, on a rack and place cookie sheets or foil beneath it to catch the drippings. It’s not ideal, but it will work. Mostly your meat will dry out too much in an oven. But, hey, work with what you have.

As an Amazon Associate and member of other affiliate programs, I earn from qualifying purchases.

This recipe sounds so good, can't wait to try! Thanks so much!