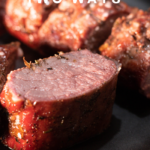 Jump to Recipe
As an Amazon Associate I earn from qualifying purchases.

Try one of these two delicious venison backstrap recipes to make the most of the best cut of venison you’ll ever taste.

We love deer meat in our household. My kids will eat venison steaks over beef any day of the week. Venison burgers? Yes, please. And of course, the backstrap is no exception, it’s a great cut of meat. Who doesn’t love deer backstrap? It’s tender, it’s delicious, and every deer hunter should know how to prepare them.

While we’ve definitely had our share of butterflied backstrap medallions, and they’re good and make that delicious, prized cut of venison last that much longer, cooking the whole backstrap is a prize in and of itself.

We recently acquired a Traeger pellet grill and have made all manner of things in it from smoked chicken legs, to smoked duck, smoked deer jerky, and of course… smoked backstrap.

And while I do believe that smoked venison backstrap is the absolute best way to prepare it. I’ve got a couple of different ways to make delicious deer backstrap, so don’t fret if you don’t have a pellet smoker.

What is deer backstrap?

Backstraps of elk, deer, moose, antelope and virtually any large wild game are one of the most, if not the most, prized cuts. These muscles run parallel alongside the back of a deer. While they are often confused with venison tenderloins, they are not the same thing.

While venison loin is found within the abdominal cavity of a deer, the backstrap is found running just along the spine on either side from the shoulder to the hip resting on top of the ribcage.

These long, strips of very tender meat are fairly large, even on a smaller deer. They cut well and make excellent, tender venison steak very similar to fillet mignon, but again, a completely different cut of meat.

Sometimes referred to as the strip loin in beef, it is typically turned into what we know as ribeyes. In pork, it is known as the pork tenderloin.

How do you cook venison backstrap?

Like any tender cut of venison, you don’t want to overcook your backstraps. If you do, they won’t be very flavorful and they’ll be quite tough despite the tenderness of the cut of meat since venison is such a lean meat.

Many folks will say that they’re best grilled, others say slowly roasted like a tender cut of prime rib, and yet others will say it should be grilled to perfection.

I’ve included my two favorite ways to make venison backstrap: smoked, and grilled. While I much prefer the smoked version, the grilled backstrap is just as moist and tender, assuming you don’t overcook it, which is a big consideration when cooking venison.

Regardless of whether you choose to grill or smoke your venison backstrap, there are a few considerations to make:

This is by far my favorite way to prepare a whole backstrap. Whether you use it to cut into steaks or you slice it up like roast beef, it is a great recipe.

One of the first things you’ll want to do is marinade the meat for at least 8-12 hours. While I just enjoy the flavor, it will help pull out any “gamey taste” from the meat as well.

We have cut the backstrap straight off of a deer, put it in the marinade, and made it the next evening. So don’t think you need to wait for days or weeks in order for the meat to age. This is especially true if you have a young doe, but we’ve even done this with older bucks and had delicious results.

To make the marinade you’ll need the following:

Mix all of these ingredients in a small bowl before placing the whole length of loin in a shallow dish (covered) or large Ziploc bag. Pour the marinade over the meat and allow it to marinate in the refrigerator for a minimum of 8 hours and up to 24. Flip the bag or the meat over once about halfway through marinating to be sure the marinade gets into the entire piece of meat.

Once the meat has marinated for a minimum of 8 hours, pull it out of the refrigerator and out of the marinade. Place it on paper towels on a plate in order to absorb the majority of the excess moisture.

Preheat the smoker to 200°F. Place the room-temperature backstrap directly on the smoker grates. Smoke until the meat reaches 120°F to 135°F when a good meat thermometer is placed in the center of the thickest part of the cut. Again, you want to keep the meat on the rare side of things.

You can use whatever wood you prefer. Hickory and oak are fantastic with venison (and almost all red meat). If you want to use a sweeter wood, apple also pairs incredibly well and adds a bit of sweetness to the recipe. Personally, we usually smoke venison with hickory.

Smoking will take a couple hours, and up to about four hours, depending on the size of the backstrap.

Remove from the smoker, and let it rest for ten minutes, tented with foil before slicing either as steak or roasting “beef”.

The same recipe applies to grilling as it does to smoking. Simply place the meat in the marinade in the refrigerator for a minimum of eight hours and up to 24 hours.

Remove it from the marinade and allow the excess moisture to drain onto paper towels while you allow the meat to come up to room temperature.

Place the backstrap on the preheated grill, directly on the grates.

Grill the meat for approximately 7 minutes per side, depending on the thickness until the meat reaches an internal temperature of 120°F to 135°F.

Allow the meat to rest for approximately 10 minutes tented with tin foil before slicing.

Marinated overnight and slow smoked or grilled to. perfection both of these venison backstrap recipes are sure to make even the most hesitant diner a venison lover for life.