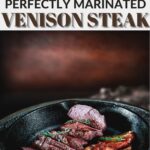 The trick to delicious venison steak is to cook it only to rare or medium-rare and allow it to sit for a few minutes after it’s removed from heat. This marinated venison steak infuses a delicious flavor you won’t want to miss.

Venison seems to be one of those things that people either love or hate. It’s not at all like the grain-fed beef that many of us are used to. However, when cooked properly venison is by far superior in taste and tenderness. It’s also a healthier and more sustainable alternative than grain-fed beef.

We typically opt for grass-fed beef which is more similar to venison than grain-fed but still much prefer the leanness and flavor that wild venison provides. If you’re unsure how to cook it to make it more palatable to your less than willing diners, I’ve got a few tips for you before we get started with the recipe.

How to Grill The Perfect Venison Steak

While we prefer most of our red meat on the rare side, venison must be cooked rare to no more than medium-rare. If you overcook it will become tough and have a more gamey flavor. Note that venison cooks quite a bit quicker than beef and only needs to reach an internal temperature of 130 degrees. When it begins to reach 150 and above that’s where the rubbery, gamey tasting meat comes into play.

Let It Come to Room Temp Before Cooking

Instead of removing it from the refrigerator and slapping it on the heat, give it a few minutes to come to room temperature. Not only will this help with overcooking, but it will also allow the heat to be conducted more evenly throughout the meat instead of cooking the outside first.

Finish It Off With a Dollop of Butter

Whether you grill it or pan-fry, just before your steak finishes, add a dollop of butter and allow it to brown along with your steak. The flavor is amazing.

Don’t Get In A Hurry

I know… it’s difficult not to see a steak and just want to cut right into it. But, a little patience goes a long way. If you remove the steak from the grill just before it’s finished and allow it to sit for 10-15 minutes before cutting into it you’ll have better-tasting meat.

Allowing the meat to rest after it is cooked allows the flavors to go back into the meat resulting in a more delicious steak.

How to Avoid Gamey Taste in Venison Meat

The truth is… the gamey flavor is simply a matter of opinion. Venison eats a variety of wild foods for its diet. It forages on grass and other wild edibles which simply enhances the flavor. Is it different from grain-fed beef? Of course… but sometimes different is better and the flavor needs only be enhanced instead of trying to cover it up.

Remove the Silverskin and Fat

That being said, there are some tricks to avoid some of the sometimes off-putting flavors that some people complain of. One trick is to remove as much of the silverskin/fat as possible. The more fat you have left behind, the more it’s going to have flavor. Sometimes the best steak is simply sprinkled with salt and pepper and thrown on the grill.

Some people say that they can taste the flavor of venison no matter what you do… I think it’s all in their heads. But, I much prefer venison to beef anyway.

Another trick is to make sure the meat is aged properly. If you took your deer to a processor, they likely aged it for you. You can always ask. But, if they didn’t you can still age your meat simply place a vacuum-packed steak in the refrigerator for up to 14 days. No air can hit the meat after it is sealed when using this method.

Marinating your meat in a marinade like the one posted below gives the proteins a bit of time to denature which helps with the flavor. To me, this is simply an enhancement of the flavor of the meat, but to some, it helps remove the off-putting taste they swear is there. Whichever it is, these steaks are delicious.

The trick to delicious venison steak is to cook it only to rare or medium rare and allow it to sit for a few minutes after it's removed from heat. This marinated venison steak infuses a delicious flavor you won't want to miss.

Nutrition information may not be accurate.