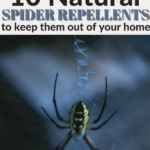 I used to be absolutely terrified of spiders. Indoors, outdoors, it didn’t matter, I wanted nothing to do with them. And then we moved out to the country shortly after we were married into a 100 year old farm house. Complete with a potting shed and a neat little garden. And spiders. Lots and lots of spiders. And I wanted nothing more than to get rid of every single one of them. But even then,  my first response wasn’t to grab a can of raid and go hog wild. It was to find natural ways to keep spiders away.

Even before I was really interested in homesteading, I still didn’t understand the need for all of these synthetic, potentially dangerous chemicals being sprayed in and around everything. From the farm fields that surrounded our house, to the things we used to clean it and protect it from pests. Natural was the way for me.

And while I’ve grown accustomed to having spiders scooting around the garden and chicken coop over the years, I still don’t want them inside our house. Thankfully, there are several natural ways to repel spiders and keep them out of your house and they’ve been used for a long time. Much longer than the chemical sprays we find at the store….

Herbs and other natural sources have been used to repel spiders and other pests for centuries with pretty good success. You have to remember, just because people didn’t have raid available at the grocery store back when doesn’t mean that they didn’t try to deter the pests from coming indoors. That isn’t to say that any of these solutions are 100% effective, they aren’t. You’re probably never going to get rid of 100% of any pest indoors or out, but these methods can help combat the issue at hand.

Like just about every pest… spiders do not like mint. When we first moved into our house, I took peppermint essential oil, mixed it in a spray bottle with a little alcohol and sprayed it all over our windowsills and entry doors. And it worked like a charm. It was fairly quick to do and I was washing them anyway. As soon as I finished washing, I left the window up, sprayed in the sill, and then closed the window, sprayed some on a towel and wiped it across the caulk line on the entire inside.

Another option is to utilize mint by growing it under windowsills, in windowsills and near doorways and other entryways. They don’t like the scent at all, so they will try to avoid crawling near it.

And third, you can crush up dried mint leaves or utilize mint tea bags in windowsills, cupboards or wherever else you don’t care to see spiders.

Living on a homestead typically means clutter. And clutter and spiders are kind of synonymous. So, it’s time to pick stuff up a little.

Indoors you’ll want to dust surfaces, remove cobwebs as soon as you see them, put away packages as soon as they are received and try to avoid storing things in cardboard boxes. I know… who wants to dust? I didn’t say it needed to be ready for your mother in law to visit, though. Just a quick swipe with a cloth and take a broom in the corners where you see the cobwebs. Spiders really like dust and they’re attracted to dark, dusty corners and cardboard boxes. We don’t need to clean like we’re expecting royalty, though. This is a farm, after all….

Outside… well, you’ll want to make sure anything growing around your foundation, doors and windows isn’t overgrown. Keep your grass clippings and straw and hay away from your entryways. And as for firewood, it’s best to put it away from your house. I know, no one likes to walk in the cold to get firewood, but if it’s too close to your house, you’re just asking for them to come inside.

Vinegar is one of the most versatile products in the world. It naturally cleans things, it naturally deodorizes things (despite its smell when you first use it), and it repels things. Among a host of other issues.

Spiders are put off by the odor of vinegar, but the liquid itself contains acetic acid which harms spiders. You can simply mix vinegar half and half with some distilled water in a spray bottle to use. It will kill spiders if you spray them with it when you see them, but you can also use it as a repellent.

You can spray this spray indoors and outdoors. Spray it where you see other insects congregating because it also repels them. Outdoors when it’s hot out you’ll need to spray quite frequently, inside you can go several days between sprays.

Diatomaceous earth does not instantly kill insects and arachnids, however it works over time by drying them out as they walk through it. Spiders are a big target for this method because they thrive in moist environments and dry out pretty quickly

If you don’t live on a crawlspace or otherwise have access to the underside of your home, you can simply sprinkle diatomaceous earth in the areas where you often see spiders and don’t want them. You’ll want to use a thin, even layer wherever you put it. However, it is fairly inexpensive and a little goes a long way. Just wear a mask while you’re sprinkling it so you don’t breathe in the dust. It cannot harm your animals or wildlife. Just insects….

You can make a spray utilizing essential oils that spiders don’t care for along with water, apple cider vinegar, and dish soap. It’s pretty simple, mix it in a glass bottle, though since it has essential oils in it. Over time the oils can break down the plastic and we don’t want that. Glass is definitely the way to go when making just about any natural remedy.

To make the spray, you’ll need a glass spray bottle, the oils, a little dish soap, and some vinegar. I also use distilled water simply because we have massive amounts of iron in our water and I don’t want it in the spray. This stuff actually smells pretty pleasant, too. Anyway, here goes:

Simply mix everything together in your glass spray bottle and spray in the areas inside your home where you notice spiders. Like bathrooms and other damp rooms. You can also spray this outside along entryways and windows. Outdoors you’ll want to respray every few days and after it rains. Inside about once a week should be enough.

While mint is typically a go-to when it comes to repelling things, there are actually several essential oils that you can use to repel spiders. You can put them on cotton balls and place them in windowsills, you can spread thin layers of them around entrances, you can mix them with some alcohol and spray them, and you can mix them together to make a natural spray.

Spiders do not like the odor of citrus, either. Plus, it also contains acetic acid like vinegar does. If you have citrus scent essential oils like lemon, orange, or grapefruit, great, but if you don’t not all is lost. You can also use the peels after you finish eating these fruits and simply rub the oils from the peel onto windowsills and doorways. The scent will last for a few days and you can reapply every time you have another citrus fruit peel available.

I’ve seen it suggested to put the peels in windowsills and such, but I’m not going to suggest that here. My dogs and toddler would have them ripped apart and I’d end up with random, hidden and potentially moldy citrus peels everywhere. The peels belong in the big compost pile right after they’re rubbed on the windowsills.

Most insects don’t like cedar. It’s naturally insect (and arachnid) repellent. Moths don’t like it, either. Which is why closets and chests used to be made out of cedar so that clothing and linens could be stored and kept safe from moths.

Anyway, you can utilize cedar to repel spiders in a few different ways. You can find a bottle of the essential oil and spread it, but it’s pretty cost prohibitive. Cedar is generally one of the more expensive oils. You can utilize cedar mulch around the perimeter of your home and you can make satchels of cedar and put in and near your entryways. Like I said, not for everyone. Cedar can be incredibly expensive, but… it can be worthwhile. Cedar is also weather resistant which means mulch is going to last a lot longer.

9. Leave the Lights Off

My husband gets home late in the evenings and it is often dark when he arrives, but we don’t leave the lights on by the porch unless it’s the dead of winter. The reason? Spiders eat insects and insects are attracted to the light.

That doesn’t mean we live in a dungeon, we use indoor lights. We just don’t use lights outdoors much. If the bugs are buzzing, the lights stay off unless they’re needed and then they’re turned off as soon as we are finished.

Since exterior lights are generally right by the entrances to your home, it’s best to leave them off, especially in the warm months. Besides, if they’re on all manner of insects generally fly in when you open the door anyway, and no one wants that.

Hedge apples are an effective way to repel spiders. They also repel mice and a host of other insects and pests. If you’re not sure what a hedge apple is, it is the yellowish green fruit produced by an osage orange.

You can simply take hedge apples and put them in your crawlspace or basement to help keep spiders out. Along with other critters you don’t want around.

Spiders are a natural and essential part of our world. They have some amazing benefits, they eat other insects (and some even eat other spiders… like the wolf spider). While we don’t have to like them, we do have to learn to live with them. At least, a little bit.

I’ve learned to like spiders, as long as they’re outdoors and enjoy marveling at the creations the make around our homestead. However, these solutions can help keep spiders out of your home.

I hope some of these repellents help you keep these creepy crawlies to a minimum inside your home.

I grew up in the country, and we used to consider having spiders in the house good luck because they ate the other insects.

I've heard that before, we usually get pretty large wolf spiders in our house and the kids don't care for them, so they go outdoors.