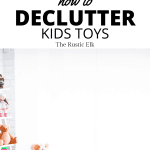 Toy clutter is probably the most overwhelming pile of crap in your home for moms. At least, it was for me.

They pile up so quickly and we aren’t sure what to do. There’s so much money wrapped up in them (despite the fact they break 10 minutes later). We think they need toys in order to have the proper development mile-stones. Consumerism that is engrained into us tells us the latest hit toy will make our children happy.

And that’s what we moms want, right? Happy, well-rounded kids. So, we buy them. Grandparents shower our kids with their love by buying them all kinds of stuff and then when all is said and done?

We have an overwhelming pile of crap toys and cranky kids.

They fight over everything. They don’t want to clean anything up. It causes overwhelm and unhappiness throughout your entire home instead of the toys providing actual, constructive opportunities to play.

Toy clutter can suck the life out of you as a mother.

But, it doesn’t have to be so overwhelming. We have whittled down the toy clutter to a large bin (that’s only about half-full), a bin of legos, and a few toys for our youngest (who is 6 years younger than our oldest). And it has been life-changing.

Tossing the toys has completely transformed our lives.

Really. I’m being completely honest. But… there’s a right way and a wrong way to declutter the excess toys. You don’t want to do it in the heat of the moment because you’re mad. You don’t want to just start tossing toys without any thought about the children they belong to. So, how do you declutter toys?

Why do you want to ditch the excess toys? For me it was because I was sick and tired of constantly having to pick up messes and break up arguments. But, you need to know why you want to do this. Otherwise, you’ll keep stuff for the sake of keeping it and that’s not productive. Some ideas:

If you just nagged your kids for 20 minutes to clean up their crap and lost your cool… now is not the time mama. When I decided the toys had to go, I did nothing with them other than pick them up out of the middle of the floor. We all ignored the elephant in the room for the rest of the evening, switched on a movie, and relaxed.

The next day, we were all calm, rested, and nourished and that is when we tackled it. When everyone was calm and the moment that had prompted the great toy declutter was over.

Waiting until everyone is calm and rested will help tremendously in tackling the toy clutter. I had tried in the past to do it right after we had had a spat over cleaning up their messes. I was met with tears and frustrated kids. So wait….

You know what happened when I told my kids they could have their bin of legos and whatever they could fit into the large bin they had stuffed full of crap in the closet?

Amazing things. They had no problems dumping everything out and filling that bin with meaningful stuff. They didn’t fight about it. They didn’t drag their feet. They simply went through and kept stuff I never even imagined they would keep. They were all simple toys that inspired creativity and their imaginations.

If your kids are old enough, involve them in it. I put very doable, yet gentle, limits on the amount of things they could keep. They had no problems staying within those guidelines and happily went through every toy and let it go.

When we did the great toy purge, I set a limit. They were allowed to keep their legos and wooden building blocks, no questions asked. However, everything else had to fit in a large plastic tote. I also allowed them to keep 5 stuffed animals (plus their favorite, can’t live without it so I guess 6) that go in a net in their room.

Amazingly, they didn’t even fill the bin. But, the point is to set limits so they know exactly how much they can keep. This keeps you from saying “Oh, well, I guess we can keep that”. Because if it doesn’t fit, it doesn’t stay.

Whether it’s a big bin like us, a shelf, a corner, a specific amount… whatever it is, set a limit and stick to it.

Questions to Help Decide What Toys to Toss

Some things can obviously go. Anything that is broken, crappy kids meal toys, cheap stuff from the gum ball machine at the dentists office (why do they do this??). All of those things are definite goes.

Some things are more difficult. The toy was expensive (even though they never play with it). It was gifted by a family member. Oftentimes, we as adults have a harder time letting go of toys that meet those criteria than kids do. I will say if your child puts a toy in the donation pile, leave it be and let them. They know what they love and play with much better than you, even if it cost $100.

How to Keep Toys from Overwhelming You Again

It can be hard to keep toy clutter under control. Even if you don’t purchase many, or any, toys for your children I bet you have other people in your lives that do.

My dad is terrible at this. That’s just his love language. He likes to give things. And while that’s great, it’s just not the way we are. But, he’s their grandpa and I can’t just say “Hey, stop giving your grandchildren stuff”.

He brings them stuff almost every single time he comes up, which isn’t super often, but often enough. Most of the time, it’s cheap junk that they are disinterested in by the end of the day and we let it go. Sometimes, though, they love it and they want to keep it. I generally stick with the one in one out rule for these instances. If they get a new toy they fall in love with, they have to part with another.

Other times I don’t do anything about it. It fits in their bin and it’s not overwhelming anyone or anything, so it gets to stay.

If you have a person in your life like my dad, that’s my best recommendation. For others, like my mother in law, you can just talk to them and explain to them you are all much, much happier without all the excess junk. She usually asks what they need and we go from there.

Another thing to keep the toy clutter at bay is to watch less TV. There are so many commercials on TV begging for us to buy things. Our kids see the latest, greatest toy and they think they need it. Watching less TV (or less cable with commercials anyway) helps keep that itch to have more at bay.

And lastly, you’re going to have to occasionally go back through the toys and remove the excess. In order to keep it from getting out of hand, I do it before Christmas, before birthdays, and usually one random time in late summer. It doesn’t take long after the initial purge and helps keep it under manageable control.

Keeping fewer toys may not be the easiest thing to do, but it’s so worthwhile and the benefits to you and your child are amazing.

How do you tame the toy clutter in your home?

Hi, I loved your article. How do you encourage grandparents and other family members that you’d rather have them gift your kids experiences or useful items instead of more toys?

Hi, Kristina. It can be difficult to get grandparents on board sometimes (a lot of times for us). And, I will preface this by saying, sometimes you just have to let it go and deal with it. You can always set your own one in- one out rules to keep the clutter under control if they insist. But, simply opening up the lines of communication by letting them know how you (and your children) feel about excess material gifts can go a long way.

Perhaps you can talk to them about going all in for a gift that involves the entire family (a trip, for instance) instead of buying toys that will be broken, unloved, and unused much quicker than the memories from an amazing trip will fade.

And lastly try using wishlists. I'm always amazed at what my kids actually want. Very rarely is it a toy. A lot of times it's a book, a trip somewhere, or even just a family day of fun and ice cream.

Appreciating the time and energy you put into your website and detailed information you offer. It's nice to come across a blog every once in a while that isn't the same old rehashed material. Excellent read! I've saved your site and I'm adding your RSS feeds to my Google account.

I flipped out the week before school started and bagged up ALL THE TOYS in my house and left them in the basement office. Kind of shot myself in the foot as 2 big kids left 2 little kids home, once school started, without any toys. But we've survived. The sad thing is that I don't even accumulate toys outside of the categories you've listed above and I still want to blow up our play room about once a year.

LOL I totally get it. I am the same way. Except I usually want to blow up our play room about once a month. It's hard to find a balance. So hard. I'm trying to find a way I can handle it, or downsize more and not go crazy or make my kids hate me. I guess setting limits on how many toys will be the next logical step for us.